Akan National Park, is Japan’s second oldest national park registered in 1934. Starting our short forest and lake hike I put on snow shoes at the Eco Museum, located at the edge of Akan Hot Spring area. The Eastern Hokkaido area does not have as much snow as other parts of Hokkaido with a yearly snowfall of about 50cm. However, snow had fallen the day before and on this morning the area was completely covered. Our guide said that in summer, they didn’t step into the forest for fear of harming native plants and such like. However, in winter thanks to the snow, as damage to the nature is minimal, we can walk with snow shoes wherever we liked. 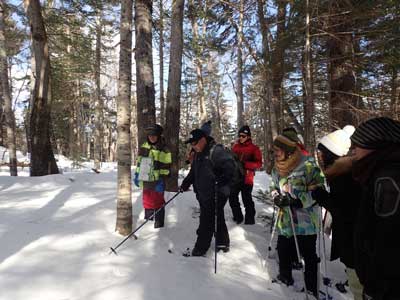 I started to climb a slightly elevated hill from the low-pitched area. After a few minutes’ walk, my body became warm from the exercise. As our guide occasionally stopped to explain things, I didn’t find the climbing difficult.

On the way I found footprints of small animals in the snow on both my left and my right. Our guide informed me that the ones to my right were footprints of a marten. The footprints on my left were in a straight line like those of a fashion model. They were made by a fox. How dainty!

Next, I found the footmarks of an Ezo squirrel, and a pocket in the snow where the squirrel seemed to have dug after he buried nuts in autumn. As the Ezo squirrels do not hibernate, they get hungry during winter. I wondered whether they recently filled their bellies from food in this hole. There were even more footprints that wandered all over the place like a drunkard. Those were of a raccoon. Next, footprints that had huge strides were of an Ezo deer! I thought to myself that there are many animals surviving in the snow during winter. In this quiet forest, animals are coming and going busier than I had ever expected. It was interesting to me that we could only see this busy activity in winter due to being able to view their footprints.
Five minutes after starting to climb a hill, I came to a flat place with many tall trees. The trees in winter without leaves were showing their expressive trunks. Rough bark, smooth bark, military-looking camouflage patterns, stripes, and so on…. Looking at the scene from faraway, the forest looked like a brush painting, filled with chic and rich colors and shapes. In these forests white birch, Ezo spruce, and Todo firs are plentiful. When I came closer to a Todo fir and rubbed the spiky leaves, I could smell their fragrant smell. The Todo fir’s trunk had a deep crack lengthwise. Our guide told us that water within the tree increases in volume and after freezing, it split! During the morning, as the temperature was around minus 25 degrees, we could hear the echo of cracking trees, which sounded like car tires bursting. When I looked around, I found traces of frost cracks on many Todo spruces. I wondered how they were able to survive after the damage they endured in winter! 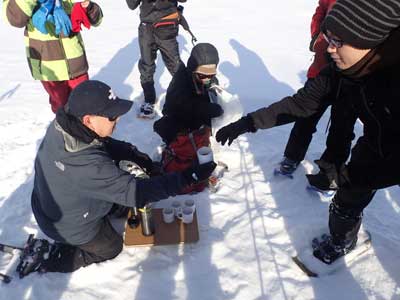 When I walked up to a flat hilltop, there was a track on the slope towards the lake side where someone had slid down. I thought, “Umm, should I go and try it?” Then, I made up my mind, and slid down the 6-meter slope while lifting the tip of my snow shoes. In a second, I had reached the flat. I was happy that I had the courage to try it and hadn’t chosen to go down the slope step by step. A big camphor tree was standing here. Ainu people said that the camphor tree has a good spirit. So, if we get lost, we should ask the camphor tree for help. The camphor tree was standing tall and dignified, like a strong sentinel. The thick trunk had a hole inside, in which I bent and entered for a while. 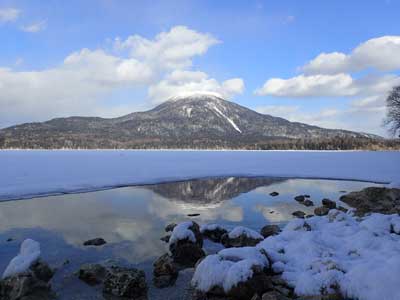 I continued on the flat for about 5 minutes, we suddenly came upon an open space. Withered reeds were shining gold in the sun, and a sulfur smell was in the air. I had arrived at Lake Akan. The lake has an average depth of 18-meters and the surface freezes over completely in winter. The thickness of the ice can be up to 50 centimeters! People can walk on the ice, and even the heavy snowmobiles can ride across the ice as well! A big ice festival is held on the iced lake in winter. But the lake is a crater lake, and hot spring water comes up from the bottom of the lake, so some shallow places don’t freeze. I realized that there was some thin ice on the surface after I come closer to the lake. It was beautiful to see the surface of the lake sprinkled with grains of rough ice which looked like granulated sugar.

I looked at Mt. Oakandake from the frozen lake. Mt. Oakandake has not erupted in recent years although it is an active volcano. On the other hand, Mt. Meakandake, standing about 9 kilometers away, frequently erupts. According to the Ainu legend, these two mountains are husband and wife, but the husband Mt. Oakandake also had a lover mountain somewhere else. The wife, Mt. Meakandake, repeatedly erupts with jealousy. It is said that his lovely Ainu legend came from the balanced and beautiful shapes of these two mountains. 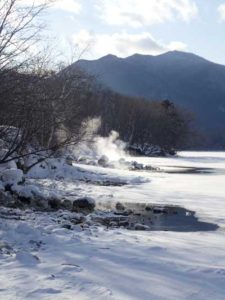 When I timidly walked on the lake, I came to an place that wasn’t frozen near the lakefront. Warm hot spring water came from the underground keeping this area free from ice. On a windless day, if you bring your face close to the water, the lake surface reflects Mt. Oakandake. The tree branches hang with lichen called Saruogase like a hundred old man’s beards. It is said that these only grow in places with the cleanest and purest air.

When I reached this point, the Lake Akan hot spring area comes into the view. I was impressed again that there is such a busy tourist spot but the surrounding nature is untouched and unharmed by human activity.

I took off my snow shoes on the lake near BOKKE, and easily walked along the nature trail that had only a light dusting of snow. The strong smell of sulfur was apparent and a wooden sign explained about BOKKE. BOKKE which is Popuke, a ‘boiling spot’ in the Ainu language. I could see hot volcanic mud boiling up from a crack in the ground.

I was told that occasionally animals fall in and that only their bones are left after two days due to the high temperature and strong acidity. I was glad that there were strong wooden barriers stretched around the area for hazard control.

Some places had no snow as it may have a high geothermal heat. We could hear crickets singing even in midwinter. On the way back to our starting point, I saw the withered calyx of OOUBAYURI, a kind of lily. The roots of the plant used to be valuable food for the indigenous people Ainu. The brown flowers of SABITA, which do not fall from the trees after withering, are left on the trees. In the language of flowers, it means eternal love. I returned to the place where we started our trek. Even in an hour and a half, I was on such a high that I could encounter the bountiful plants and creatures during our short snow shoe walk in the majestic winter forest and lake area of Akan.