It was such a beautiful picture when I arrived at Asahidake, Daisetsu National Park, 1,000 meters abovesea level. Behind the Bearmont Hotel, our friendly guide showed us how to put on our snow shoes and we excitedly walked into the winter forest. 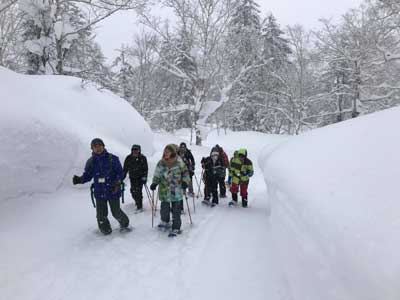 Pine trees with dark green leaves and birch trees with white trunks stood out against the white snow. When I looked closer, I could see that the pines standing next to each other were of different varieties. Taking off my gloves, I tried to touch the leaves of the tree on my left, but those of the spiky Todo Spruce were itchy. Next, I tried the Friendly Ezo Fir on my right. Those leaves were ok so I could shake hands with them, greeting them as we walked further. I noticed that the Todo spruce had a lump on the trunk where it collected resin. When I popped it, the slimy resin came out. It had fresh and fragrant scent. Our guide told us that this is Phytoncide, and it has a relaxing phenomenon when walking in the woods.

Walking a bit further, I came to a big Ezo spruce. Under its branches, there was a big space without snow. Wow, it was like a hotel room—silent, without wind, and very comfortable. I feel a bit warmer than I had been outside, and I thought I could spend the night there covered in a fluffy snow blanket. I was told that in snow storms or heavy snow, Ezo deer do just that, sleeping under the Ezo spruce for shelter.

I was walking in the deepest snow that I had walked in in my life. Amazingly, even with snow shoes on, I sank into the snow right up to my knees. When it snows, it often snows a lot, sometimes as much as 80 centimeters in one day. I thought that it wouldn’t seem dangerous to jump down from a big snow covered rock that was next to me. It must have been 3 meters high! So I plucked up the courage, climbed to the top and jumped down into the snow. Huurah! I was right! It was like jumping into a huge marshmallow. I was totally covered in the snow and I feel like I was part of the snow. After a while, I tried to get up but my hands couldn’t find any support. My body just sank deeper and deeper into the snow. I gave up and asked for help from my friends. Next, I ran up a hill and tried sliding down. I slid so fast! I tried again and this time I let myself lay flat on the snow with my head at the front!! What a thrilling experience!! 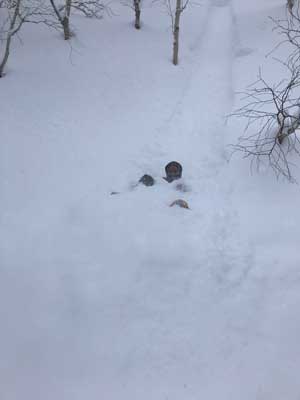 As we continued to walk through the deep ezo spruce forest, we suddnely came upon an open space. The guide said that we were now walking on top of a snow-covered wetland. Actually, we were standing on top of snow 2 meters deep! Walking further down, we got to a pond. It doesn’t freeze in winter because of a natural hot spring which pushes up warm water from beneath. Varieties of waterfowl were happily swimming around on the water. I thought that this must be a paradise for them.  When it is sunny, from this point you can see Mt. Asahidake, the highest peak in Hokkaido.

When I was walking in the snowfield, I sometimes noticed 2m deep holes which I couldn’t see until I came close to them. This area is a volcanic area, under which hot spring water melts the snow above. These kind of holes can’t be seen easily as the snow covers them up. You have to be careful not to fall into them!

From one tree to another, footsteps of animals could be seen. The ones we saw were made by a fox. The guide said that foxes look for mice which may be at living within the roots of the trees or they maybe just looking for a place to rest for a while. Animals don’t want to waste their energy as this snow is very difficult to live in so they are often finding places to take a rest.

At Mt. Asahidake, big and beautiful snow crystals are easy to find. It takes a certain humidity and temperature to create these crystals. Snow reaches from the sky to the ground as a single unit of crystal. Wow, the snow crystals were on my jacket! I quietly looked at them as even the big crystals melted under my own breath. I took lovely photos of them with my smartphone

It was a really amazing experience to walk on the fluffy snow. As it was so fluffy, it was like swimming in a sea of snow, rather than walking on it. In fact, I tried swimming in it, and found that it could be done by getting on my hands and knees and using my hands to push through the snow. When crawling along, my face was covered and I felt a sense of ease by being enveloped in fluffy white snow.

The snow in Mt. Asahidake is the whitest snow I’ve ever seen. I walked in this deep white snow and slid down from snow covered cliffs. We even built an igloo and I decided that it was such a wonderful morning, experiencing all the amazing activities that we could enjoy in the snow.