Living together with forests 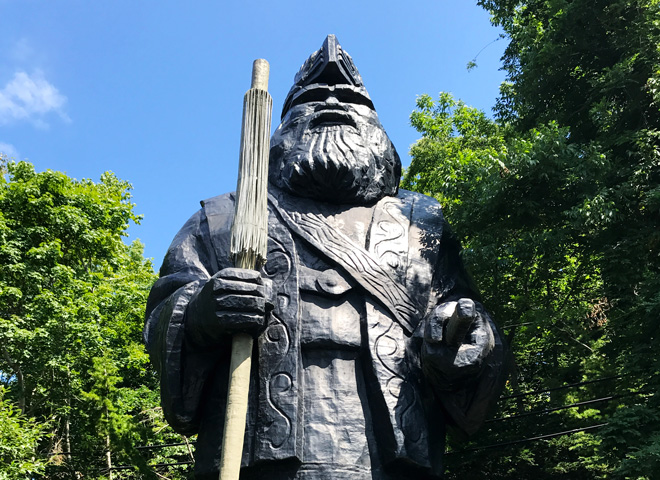 Feel the culture of the Ainu, the indigenous people of Hokkaido, and life in the forests of Hokkaido based on Ainu culture

The Ainu are the indigenous people of Hokkaido, Sakhalin and the Kurile Islands. They believe that plants and wild animals in the realm of nature are gifts from the gods which were sent to them so that they could be useful to human beings.
The Ainu knew everything about the natural environment in Hokkaido, and made use of the abundant natural resources for "food, clothing and housing", and were also using these resources for trade with the people surrounding them.

The Ainu also regard everything in the natural world as gods, and therefore the focus of  prayer. The Ainu don’t think that human beings are above nature, nor that they can control it. In addition, they believe that only when they acquire the gods’ consent, are they able to receive the benefits from nature.

The Ainu’s wisdom, life-style and view of nature, in which they made good use of the resources that  nature provided and lived in harmony with nature, have been inherited by the pioneers of Hokkaido, and now forms the basis of the way of thinking of Hokkaido people.  In these times when there is concern about the environment, this way of thinking has some good lessons for sustainable development.

Let’s walk through the forests and along the edge of a river and lake where wisdom has been received by the Ainu Fuchi (old women) and Ekashi (old men); and feel a bit of what they felt.

Overview; The Shiraoi Ainu Museum is the starting point of this tour. Within the grounds of this open-air museum  you will see Chise (Ainu houses), Pu (food storage), Hepere-setsu (cage for little bears), and Chipu (dugout canoes) that have been restored for exhibition, reproducing an Ainu Kotan (village). More than 5,000 materials are kept in the museum, of which 800 pieces are permanently exhibited. This museum is an important starting point for the nature walking tour as well as a place for reflection after returning from the forest. Now, the museum is preparing for the opening of the National Ainu Museum and National Folk Symbiosis Park in 2020.

We enter the forest from the signboard showing the Lake Poroto circuit course  in back of the Ainu Museum. We proceed into a bright forest mainly consisting of broad-leaf trees.  The restored Kotan, which we can see between the big trees, draws us into another time and we can imagine the life of the Ainu in those days. The forest was considered a place of food storage for the Ainu. When we turn our eyes towards the ground around the trees, there is a plant which can’t help but draw our attention. Oubayuri, with large silky leaves and big cream-colored flowers, bears big fruit in the autumn. Starch taken from its root bulb was an important food resource for the Ainu.

From what the Ekashi said, when it’s “Mokiuta” (nearing the time to harvest the Oubayuri bulb), the Ainu start to prepare for it. At the time of “Shikiuta” (the time to harvest the oubayuri bulb), Ainu women enter the mountains in groups and harvest the starchy bulbs. The Ainu had a different sense of the seasons from the Japanese idea of the four seasons we now have. Rather, the Ainu had “time-frames” such as when the bulb of the oubayuri, an important food source, contains starch. Therefore, they don’t name that time-frame as January or February. Ainu seasons are expressed according to subtle changes in natural phenomena and what they need to do at that time. Perhaps we should consider not only global standards, but also the rhythms of nature in local areas.

As we proceed, big trees of katsura, Kalopanax, maple, chestnut, and oak appear one after another. The density of the forest is overwhelming.

Trees were once regarded as “Shirikoro-Kamui” (gods who control the Earth) and also “Iworo” (chiefs of the hunting ground). Particularly big trees with longer lifespans were revered, so when people entered the mountain for hunting, they made offerings to the trees and prayed for successful and safe hunting.

The big trees which stand out in this forest are katsura, which live the longest in Hokkaido. The Ainu made dugout canoes from this tree.

An Ekashi said that a violent man once tried to cut down a katsura tree without prayer, making the katsura tree god angry. As a result, the tree became so  rigid that the man could not cut it. Conversely, when  a pious man came and raised his axe after a polite prayer, the katsura tree softened and the god offered the tree to him. After the wood of the tree was processed, the god inhabiting the katsura tree turned into a “god of a ship” to further help the man.

The Ainu view of nature is that “Kamui” (gods) have the same appearance and emotions as human-beings. They also believed that Kamui are like souls that live temporarily in the bodies of animals and plants. Therefore, the Ainu harvest the bounties of nature only after  they get consent from the Kamui. This reverence for nature and moderate use of resources has protected Hokkaido’s abundant natural resources for generations.We are obliged to embrace this spirit and pass on Hokkaido’s natural gifts to future generations.

When we proceed a little more, we arrive at a small point of land that projects into the lake. The wind coming up from the lake is very pleasant. A big oak tree rises up and seems to engulf the entire area.  Trees not only offered their bodies, but also protected human-beings. When people tried to dig a hole under a standing tree to hunt a hibernating bear, the god within the tree persuaded the god in the bear to allow itself to be caught without incident.

When being chased by a dangerous bear, the Ainu were said to have escaped by  praying “Shirikoro kamui ikashikama” (Please, gods of the trees, protect us). We can also feel the god of the tree in this place; talk with this oak tree like the Ainu. You may feel a new sensation within you.

The road continues to a hill that alternately projects into the lake and through receding swamps. You can see many animal tracks coming from the mountains towards the water. They are the trails used by the Ezo deer coming and going between the mountain and the lake for drinking water.

Deer were important animals for the Ainu. The meat was a valuable food source, and its fur and hide were used for clothing. “Yuku”, the word for deer in Ainu also means “prey”. From this we can see that the deer were familiar natural resources which were tightly bound to the Ainu way of life.

Ezo deer were on the verge of extinction due to over-hunting about 150 years ago. In the last 30 years, however, they have been increasing rapidly and it is very common to encounter a deer while driving around Hokkaido. This has had negative effects on the environment as the eco-system is out of balance. A project has begun to utilize the wisdom of the Ainu by hunting the over-populated deer moderately and making use of the blessings they provide while balancing out the eco-system. Nowadays, Ezo deer are Hokkaido’s representative game animal. You can try this delicious, healthy, and mineral-packed meat at restaurants and hotels throughout Hokkaido. Enjoy venison the way the Ainu have for generations.

As we pass under the highway, we encounter a pristine river flowing into Lake Poroto. The beautiful river meanders gently, unchanged from its primeval form. You can also see spring water from the riverhead. For the Ainu, this river and the source of the spring water are very important. We know this from that the fact that there are a lot of place names which have the words “nai” (spring/marsh/stream)  and “petsu”(river). When traveling around Hokkaido, we recommend you search for the origin of the place names from the meaning of the Ainu language.

Poroto Campground is our goal. Near the entrance of the campground, an elm tree grows. The giant elm tree spreads its branches out, magnificently dominating everything around it. There is a feeling of grandeur and awe.

In the Ainu’s Yukara (lyrical verse), there are  a large number of myths regarding elm trees. The elm tree is a beautiful goddess who gave the Ainu the knowledge of fire and clothing. Coincidently, the chief god of the people of  northern Europe, Odin (who in their belief system created the universe) gave a soul to an elm tree and created the first female. Her name was  Embla, which over time changed to the name given to the present tree we know as an elm tree.

In Hokkaido, where the climate resembles the climate of the north-western hemisphere, we feel that there may have been exchanges between human beings and their respective cultures with the Eurasian continent long, long ago which might have resulted in similarities between the cultures.

After taking a break at the Poroto Campground Visitor Center, you can go back along the same path you came, or return on the path looking at  the forest on the right shore of the lake.

When you arrive at the campground, you can collect white birch bark to make a fire. Kamuinomi-- The Ainu sent prayers to their various gods through praying to the God of Fire. It’s also fun to sip a cup of wild Ainu tea sweetened with tree sap from white birch and maple trees, which has been a custom of the Ainu since time immemorial. You can also have fun trying your hand at woodworking with some green dogberry or willow sticks to make “inau”, ritual wood-shaving sticks that the Ainu used for praying to their gods.